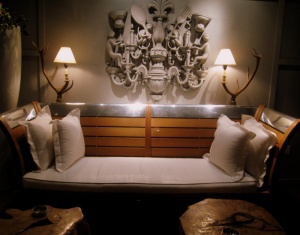 I rode to this eatery with my friend and associate Josh, the instigator of this endeavor, and even as we approached the Hotel SLS I could see I was in store for something extraordinary. Off to my left, in a covered outdoor area, beautiful handcrafted couches were beautifully lit by a raft of exotic lamps, and in front of us through a glass door was a screen of some sort with a butler doing, well, butling; he had the distinct appearance of someone whose name had to be Jeeves. Next to Jeeves was a hostess station with two lovely young women who greeted us. We were just going to look around while waiting for the rest of our party.
And so it began, as we made our way through the “bazaar” area I was compelled to touch, stare at, photograph at a rapid rate, much like the beating of my heart — at this point as I knew I was home, as if this entire structure and everything in it had been designed to make me happy and full of wonder. I was Alice and had clearly This is saying a lot, between growing up in Big Sur and my professional career in restaurant work, I had landed in Wonderland, but there was something about the fusion of old and new at the Bazaar that had me totally hooked. I felt as though it embodied a sort of off-the-wall eclecticism that only appeals to a certain type of person like me. (Funnily enough, I bet a whole bunch of very different individuals feel just the same way about the place!) 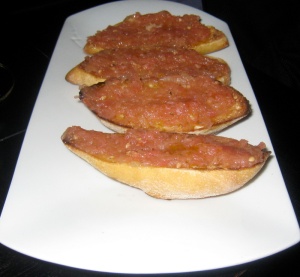 And I am only now about to get started on the food!!! It was so insanely fabulous that words are not enough; it must be experienced to fully grasp the flavor combinations and textures that prove Chef José Andrés to be a culinary genius and an artist in his own right. Josh was on the money when he said I just had to “come with” . . .
We started off with the “Not your everyday Caprese,” which disappeared so fast I didn’t even get a picture (giving me one more reason to go back — like I need another one?), and American Caviar Cones, parmesan cones with crème fraîche filling and caviar on top –phenomenal. 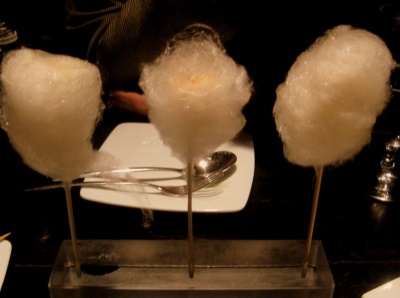 Then we had the assortment of proscuitto with Catalan-style toasted bread with tomato — another hit! Next was Watermelon Nigiri, with fresh wasabi, red wine, soy and jalapeno that was then topped with seafoam! What next, you ask? It was by far my favorite of the evening, Cotton Candy Foie Gras Lollipops — unreal, a true masterpiece!!!

But there’s more! Moving right along, there was the Kobe Beef Philly Cheese Steak Sandwich, the Ottoman Carrot Fritters with apricots and pistachio sauce — I’m going back into a foodie dreamland coma as I write this!

Then came the Catalan Spinach with apple, pine nuts and raisins; the Croquetas de Pollo (chicken and Bechamel fritters); and the Sautéed Cauliflower “Couscous,” which consisted of cauliflower purée, harissa (North African hot chili sauce), lemon and fried quinoa.
And as they say in TV-land, “But wait — there’s more!” I had spied the pâtisserie on the way in, at the beginning of this fantastic voyage into this world of unbridled creative culinary energy — so look forward to Part Two: Dessert! (I know I did!!!) Thanks again, Josh!

One thought on “The Bazaar Restaurant at SLS Hotel, Beverly Hills Ca. 90210 Part I”

This site uses Akismet to reduce spam. Learn how your comment data is processed.